The Research Network
Functional Nanostructures
is funded by the
Baden-Württemberg Stiftung.

Point defects in diamond can be artificially created with a precision of few nanometers and optically identified as single defects. They possess an electron spin that can be coherently controlled and detected and features an extraordinarily long coherence time. Quantum registers, true single photon sources and nano-spin sensors are among the recent applications. Up to now, the electron spin has been initialized, controlled and read out optically. The coupling of single defects to electric control structures and the electric initialization and readout of single spins would greatly facilitate the realization of scalable integrated quantum registers at room temperature. In this project, the electric excitation, initialization and readout of single spin defects shall be realized. To achieve this, single defect shall be implanted in the ultra-pure intrinsic layer of a diamond p-i-n diode. The first goal shall be the realization of an electrically pumped true single photon source working under ambient conditions, which shall be accomplished by electrically exciting single defect centers in the intrinsic layer. In a second step, the electrical detection of the spin state shall be investigated. To achieve this, single defects shall be implanted in a few nanometer wide surface-conducting channel of an in-plane-gate field-effect-transistor. The mechanisms of spin dependent carrier recombination shall be investigated. 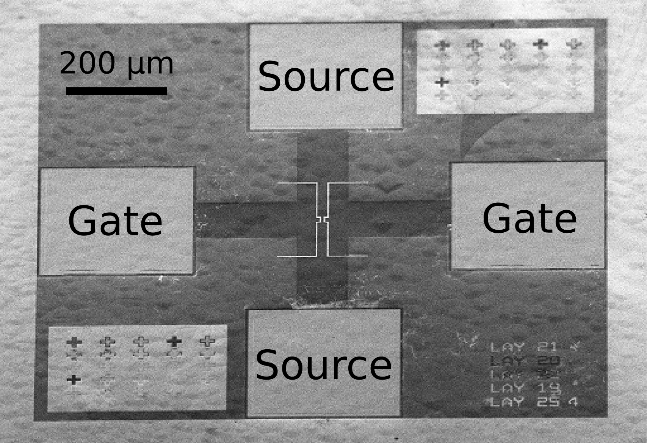 Fig.1: SEM image of a Diamond In-Plane-Gate Field-Effect-Transistor. The nanometer wide surface conducting channel in the center of the image is defined by Hydrogen surface termination.